Solo Guitar Recording for YouTube [How To] | Keener Living 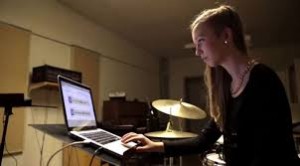 Several people have asked me how I get what they consider to be “such a good sound” and “great lighting” in my YouTube recordings.

So, rather than typing out a response to everyone who asks, I figured I’d just answer the questions here.

I do not use any sophisticated equipment. The video recording is done using the little webcam that is built into my 3 year-old iMac.

The audio is done with a $25 Logitech USB microphone. (I’ve heard that it’s best to use a USB mic because it bypasses the sound cards and controls built into the computer, but I have not researched this.)

My amplifier is an old Sunn Alpha 112r (one 12-inch) speaker with the following settings:

(These are supposedly the settings that Paul Yandell recommends. Some of my recordings use a lot more treble than Paul recommends, but I think Paul’s recommendation gives the best sound.)

I do not use any special tone settings on my Godin Multiac SA: all settings are at their mid-points. All tone control is accomplished through my amplifier.

The only software I use for the recording is QuickTimePlayer, which comes with the iMac.

Now, if I wanted to add special effects, which I might want to do on some future recordings, I could record the video with QuickTimePlayer, as I currently do, and then import the movie into GarageBand. After importing, I could add special effects or even add additional tracks so that I could play along with the recording (doing harmony and/or rhythm).

Then, off to my right about 20 feet is another 100 watt lamp (with an energy saving bulb, so it is soft white … the others are rather yellowish). Back behind me, at the end of the couch, is another 100 watt lamp. This all gives pretty good lighting. To further improve the lighting, I also sometimes open up the drapes in the room, letting in natural sunlight.

For those who use Windows-based computers, Roger Hardin, 2002 National Thumbpicking Champion, mentioned the following to me:

I have been Using Cakewalk Sonar for years. It really works great with Windows 7 but I never tried it with Vista. If you get a good audio card with rock solid drivers, Sonar is awesome. Another program worth looking at is Reaper. You can download a non-expiring demo without any limitations from the reaper download site. You can purchase Reaper for about $60. If I were starting out that is what I would go with but I am so used to Cakewalk Sonar its hard to break away.

That’s about it. For those who are interested, here is my latest video. The lighting in it is not that great for some reason (must be the time of day I recorded it), but it is not bad.

For the fingerstyle purists, you will note that I do not use the traditional 6-4-5-4 thumb pattern for much of the Hallelujah I Love Her So tune, because I wanted a specific sound, which also included occasional use of the thumbpick on the third string. I use a more traditional pattern on the Don’t Think Twice (It’s Alright) tune.

Note that, in addition to my YouTube recordings, several of my older mp3′s are located here. (These were all done about 3 years ago, mostly on my Alvarez, when I was in a particularly good mood for recording. Most of the tunes are originals.)