Brilliant Examples of Thinking Outside the Box | Keener Living 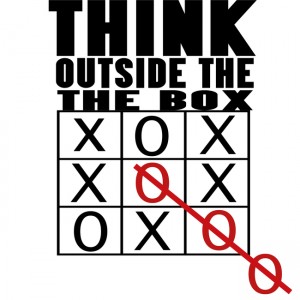 Einstein once said that Imagination Is More Important Than Knowledge. He then went about proving it by completely re-imagining the concepts of space, time, gravity, matter, and energy.

Of course, Einstein had a superior working knowledge of advanced mathematics and geometry. Yet, that would have gone to naught without a superb imagination.

As we enter into a new year, many of us are going to be facing problems that have been with us for a while. We may very well have to come up with new ways of thinking to really put those problems behind us.

With that in mind, and because I believe that we should stretch our brains by learning new facts and concepts, I present the following, brilliant examples of thinking outside the box.

While all of my examples address scientific material, the principles involved in doing such thinking can be applied to any area of life.

A physicist develops a model of the universe that has no beginning, no big bang, and no ending. This is fascinating work. I reviewed the actual paper, available as a PDF, and rapidly got lost in the math. I did recall just enough from my advanced mathematics and physics masters’ classes (some 35+ years ago) to conclude that the logic and math appear sound.

One of the most fascinating pieces of the model is that it requires that the speed of light not be constant with the expansion of space.

The paper also does well in explaining the redshift-luminosity distance data of Type Ia supernovae, whereas current big-bang-oriented models do not.

Plus, adhering to the Big Bang model also pretty much requires that we believe in the faster-than-light early expansion of the universe (inflation theory, complete with its own “particle” of an inflaton), dark energy, and dark matter.

While the Big Bang models may actually be right, it is good to see someone getting outside the box in the modeling of our universe.

A post at Edge, entitled Life: What a Concept, presents so much out-of-the box thinking about biology that the article is hard to summarize. Two things that really stuck out to me, though, were Freeman Dyson’s thoughts on metabolism as the key to the formation of life.

After reading blurbs for years about how some biologists prefer an RNA-first model for the origin of life, while others prefer a DNA-first model, it’s great to see somebody say “you’re both wrong: metabolism was what got it all started.” I also like the group’s discussion of open-source biology. Some real powerful, out-of-the box thinkers involved in the discussion.

Another article at Edge featuring Freeman Dyson: Heretical Thoughts about Science and Society. In this article, Dr. Dyson talks about the importance of being a “heretic” and in not accepting the “preferred way” of viewing things as necessarily being the right way. He then proceeds to do serious damage to those who claim that we have a societal-induced climate-change fiasco to deal with.

While we certainly do have reason to worry about what we are doing to our planet, and ultimately how we are impacting the survivability of our species and others, he shows that current climate models consider only a small fraction of the variables that impact climate.

Finally, the NYT has a great article on a physicist turns the city into an equation. The article is about Geoffrey West and others modeling how a city “behaves.” A fascinating read, again with a lot of out-of-the-box thinking.

Those of you with a technical bent are going to be fascinated with these articles. For those who are not technically-minded, let’s let another Einstein quote serve as reminder about the coming year (and life in general):

We can’t solve problems by using the same kind of thinking we used when we created them.