Voluntary Tax: A Way for Buffett to Put Up or Shut Up | Keener Living 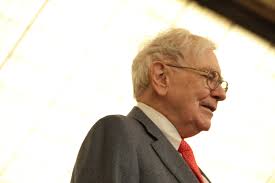 Billionaire Warren Buffett has often said that he believes all wealthy people, including himself, should pay more tax. A recent instance of his making such remarks is noted in this ABC This Week post.

I suppose he’s serious about this. He’s stated many times his belief that he is lucky to have won the “ovarian lottery,” recognizing that he could have been born into poverty and could have died of starvation at an early age.

So, why doesn’t he just cut the US government a huge check? I’m not sure. Could be that deep inside he feels he might as well throw money down the toilet as to donate it to such an inefficient government.

Or, perhaps there is no way to really do it, which is why I propose a voluntary tax. This would enable an individual, or corporation, to cut a check to the Treasury Department that would be a voluntary tax, above and beyond the required tax.

Of course, there are disincentives. For example, how does one know how the tax would be used? What if it went to keep a war going, instead of to fund improvements in education?

To overcome such a disincentive, perhaps the donor could specify how the funds are to be used (within some bounds). Or, perhaps all such proceeds could be directed toward paying off the national debt.