MS Office for iPad is better than it seems | Keener Living 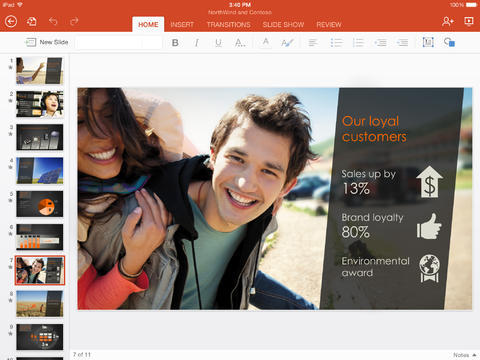 The main reason for that delay was to be expected first to leave a stable release to the environment tablet Windows, that is, the Microsoft Surface. In the absence of a good response from the public (both the tablet and for the Operating System) is I choose to release this version as soon as possible at the expense of not even out the version for Windows Mobile.

They even launched the so – called Office 365 is a Web version, much like Google Docs. In fact to use the application you must have a subscription to this service, prices for Mexico can be reviewed here. (There is a free trial period).

The best version for iOS is that the application tries not to be a port of the desktop version, it is an application designed from scratch exclusively for the touch interface. Even in my personal taste, it is easier to work in Word and Excel in Pages and Numbers respectively. Both PowerPoint and Keynote are very similar in presentation management.

But if you notice that Microsoft Office is much newer than iWork, will have to see how the new update of the suite of Apple. Even I need to experiment more with Excel, if you accept the use of macros, although they are the most basic one will take ovation standing.

Personally I think Microsoft got a 10 with these applications, as well as previously mentioned, users are much more familiar with the interface Office than with other Suite. I realized this when although Office for Mac is not as complete as the original version many users prefer it over the iWork.

Pluses : Very good interface and functionality, in addition to stability in applications.
Point against : you require to be subscribed gives you a lot to be desired and if you are already accustomed to free apps will not see as necessary to acquire it.

For a better opinion I leave the download links, I repeat,