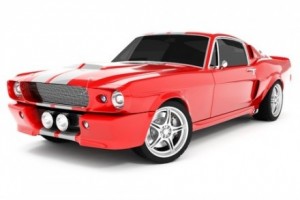 David Allen notes, in his Ready for Anything: 52 Productivity Principles for Work and Life, that the act of setting a goal gives you a new lens for viewing life, and that this new lens will actually help you in achieving the goal. This is not some sort of Wayne Dyer “power of intention thing,” where you have a thought and the “universe helps you achieve it”.

Rather, it just means that your goal will cause you to see opportunities that you would not have seen otherwise. That’s because having the goal primes you for seeing the opportunities.

David gives the analogy of how people of different professions would view the same crowd of people. He notes that an optometrist would notice the people in the crowd who were wearing glasses more than a linebacker would, and that the linebacker would probably more notice the people who were athletically built. David is very much on target with this: once you set a goal, you’ll start seeing opportunities to make it happen.

I call this The Red Mustang Effect: if you set a goal for yourself to buy a Red Mustang, you will begin seeing many more of them on the road then you ever saw before. Of course, those Red Mustangs were there are along, but you didn’t pay attention to all of them. Once you have one, you pay attention to them. That helps to keep you focused on your goal, and can help your mind get creative in reaching your goal.

Many people do not have goals, perhaps because they do not believe enough in themselves. Perhaps there are some who did have financial goals, say one to retire at 55, but saw that shattered when the economy went to hell, and now they put off having goals because of lost confidence or because of “what’s the point?”

If you are one of those, I hope this post helps motivate you to come up with goals, because just the simple act of deciding to have them helps you move toward achieving them. Of course, hard work could be involved, too. But, one thing is clear: without goals, you will achieve less.