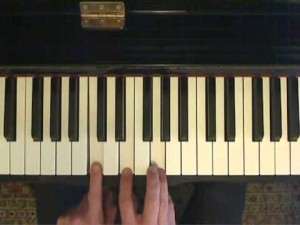 I hate restringing guitars, especially the Classicals, because new strings on the latter tend to take a good long while to finish stretching, requiring a lot of retuning. Plus, if you don’t restring often, then you can wind up like me asking “which direction do I loop this in so it doesn’t slip?”

Note that Buster emphasizes a pre-stretching of the strings, and I’ve heard pros and cons on that. Some say that it can permanently stretch part of the string (resulting in a deformity), resulting in a need for constant retuning.

Yet, I know Buster wouldn’t have emphasized it if it didn’t work for him. My guess is that it might work better for folks who change strings often, like Buster did, and that it’s potential negative effects might catch up with you if you leave the strings on long enough.

On my previous restringing, I tried it Buster’s way and, after a while, my first, second and third strings required constant retuning … I’m talking about barely being able to get through a tune without have to retune. I don’t know if that was from pre-stretching, leaving the strings on too long, or just having a bad set of strings.

Something I recently learned from my friends at MisterGuitar is that one should put the stiff end of the string (applies to bass strings only) through the bridge and not through the head, as the flexible end is more prone to slipping (it can slip on the bridge, but not on the head).

I’ve never encountered a problem in my 30 years of playing a classical guitar, off and on, but I don’t put my guitars through the paces that pro guitarists do. So, to avoid problems in the future, it makes sense to take advice from the pros.

As to tuning, I’ve tried several apps on my iPhone and iPad and prefer ClearTune. It’s also available for devices that run on Google’s Android operating system. A snapshot is shown to the left.

One more point on strings: I mentioned the D’Addario brand above, and it is a great brand. I am personally using D’Aquisto Flamenco #470 right now, and am very satisfied with them. This is the brand (and number) that Buster used, and he sent several sets to me and I still have a couple of sets left. I can’t recall the brand that I used when I seriously played the guitar (some 30 years ago).

You should change strings reasonably often. I have been known to leave a set on the guitar for months at a time (my previous set was about 10 months old), and that is just not good, even though I don’t play very often. You run into problems with tuning, as well as a severe reduction in sound quality.

I hope these tips are helpful to those of you who either play, or are thinking of playing, a classical guitar. If you have additional tips, please feel free to share them in the comments.

Update: Master guitarist John Knowles, one of the few guitarists to ever receive the Certified Guitar Player award from Chet Atkins, commented on my Facebook page that he leaves as little slack as possible when stringing a guitar, to minimize the time for stretching.

He also noted that he changes strings every couple of weeks or so, because he loves the sound of new strings. For me that would be too often, no more than I play, but about every four to six to eight weeks might work good for me.